Close X
Previous Next
Menu
Contact Us for a Free Consultation

Our very own Gina L. Colaluca and Laura A. Holwell recently argued an attorney fee issue at the Illinois Supreme Court. The issue before the Court in Gina and Laura's case was whether an attorney may be "disgorged" fees they have already earned pursuant to Section 501(c-1)(3) of the Illinois Marriage and Dissolution of Marriage Act. Under Section 501(c-1)(3) of the Act, if the Court finds that neither party is capable of paying their attorney's fees, the Court shall allocate "available funds for each party's counsel, including retainers or interim payments, or both, previously paid, in a manner that achieves substantial parity between the parties." Under this section of the statute, it is common for a family law attorney to be required to turn over "available funds" to the other party's attorney to ensure that both parties' attorneys are paid. This process is called disgorgement. The purpose of this section of the Act is to ensure that both parties are able to adequately litigate their case and that neither party has a financial advantage over the other.

In Gina and Laura's case, In re Marriage of Goesel, 2017 IL 122046, Laura's office had been ordered to turn over $40,952.61 of funds she had already been paid to the other party's attorney under Section 501(c-1)(3) of the Act. However, a problem arose when Laura claimed that the funds were no longer available to be disgorged, as she had already earned the funds in question, and had a lawful right to use those funds. The question then became whether the $40,952.61 was "available" to be turned over to the other party's attorney. The trial court held the funds were available, ordered Laura to turn over the funds, and when Laura was incapable of doing so because she had already earned the funds and lawfully spent them, the trial court ultimately held Laura in contempt of court. In other words, Laura had been held in contempt of court for failing to turn over funds she had already earned and already lawfully spent. Recognizing that this was an unjust result, Gina and Laura appealed this decision to the Third District Appellate Court of Illinois.

While Laura was appealing her case, two cases were decided in the First and Second District Appellate Courts of Illinois with respect to this issue. The Second District case, In re the Marriage of Squire, 2015 IL App (2d) 150271, held that funds are "available" to be disgorged under the Act as long as the funds "exist somewhere." The First District took issue with this definition of the term available, and held differently in In re Marriage of Altman, 2016 IL App (1st) 143076. In Altman, the First District held that funds earned by and paid to an attorney for past services rendered are not "available" to be disgorged under the Act. In holding this, the First District recognized the absurdity that results from requiring attorneys to turn over funds they have already  earned, and can lawfully spend, in order to pay another attorney. In Gina and Laura's case, the Third District agreed with the First District's reasoning, and held that funds which are currently being held by the attorney for the client which have not yet been earned by the attorney prior to a petition for interim fees being filed in the case were not available to be disgorged. Thus, the Third District agreed with the First District's reasoning, but added that it may be possible for funds which have been earned to be disgorged under the Act if those funds were earned after a petition for attorney's fees has been filed in a case. Since Laura's fees had been earned prior to any petition for fees being filed in her case, the Third District reversed the Trial Court's orders requiring Laura to turn over $40,952.61 to the other attorney and holding her in contempt. As a result, Gina and Laura were successful on appeal to the Third District. The other party appealed to the Illinois Supreme Court, where Gina and Laura were recently required to defend their victory. 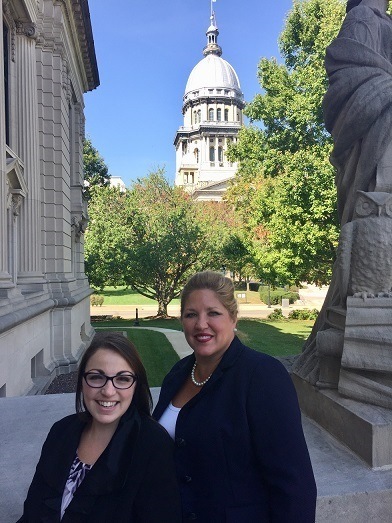 Gina and Laura at the Illinois Supreme Court

Gina L. Colaluca began working as an Associate Attorney at the Law Offices of Laura A. Holwell in 2013, where she focused her practice mainly in Family Law. She now continues to focus on Family Law, as well as Insurance Law and Appellate Law, here at Holwell Law Group, LLC.

Thank you for contacting us. We will get back to you shortly.

Please complete all required fields below.

We are here to help you with your Divorce or Family Law Case. Our attorneys provide free consultations by telephone or in person. Call us to schedule your consultation. After hour and weekend consultations are available.

Whether it’s your Divorce, Family Law or other matter, our attorneys are available to guide you through the legal procedure every step of the way. Our experience is here to assist you for the best outcome.

The information on this website is not legal advice and does not create an attorney-client relationship.